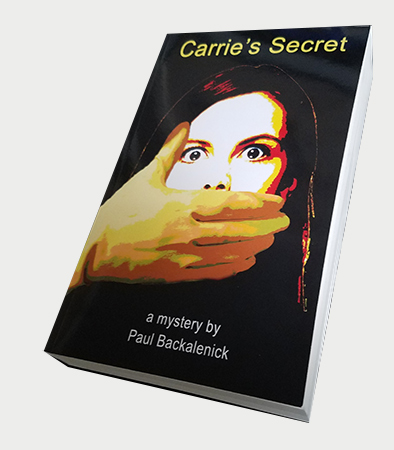 "...A thrilling story...definitely one of those page-turners that you can't put down until the end.If you love a good psychological thriller, this book should be next on your list."
- Amy's Bookshelf Reviews (Read full review)

Watch an interview with the author

(Please turn up the volume. My mic was a little low.)

A teenage psychiatric patient carries a dark secret while her broken family tries to survive and an innocent man faces jail.

From the outset, readers know that someone on the hospital staff knows a lot about Carrie and her sibling. That man is certain that sooner or later, Carrie will speak, and he must prevent that. When she drops from an open window to the hard asphalt parking lot, lapsing into a coma, the police don’t know if she tried to escape, tried to kill herself, or if she was pushed.

But when evidence of foul play emerges, everyone in the facility comes under suspicion. Jared, a psychiatric aide in the hospital, has been cleverly framed for the attempted murder and the police arrest him. Poor Jared already has problems with drugs and alcohol, not to mention being in love with a young nurse, and he must handle all the pressure and exonerate himself, if he can.

"Great pacing.  The action moves back and forth at a solid logical clip.  There aren't any dwell points where the story becomes stagnant."

"Very engrossing, captivating, and a great mystery. The most fascinating aspect is Backalenick's ability to express the mental and emotional processes of clinically mentally ill people.  So it is a great murder mystery, many clues, many people, great plot, great setting.”

"I'm usually pretty good at figuring out whodunnit, but I was not able to figure this one out until it was revealed at the end, which made it an addictive read!"

"A really good book. I really like the ending.”

Read an interview with the author